Patsy DeCline – The Queen of Country Corn is the alter ego of Adelaide actor, singer, songwriter and designer Kerry Reid.

‘Patsy’ hails from Nashville, Tennessee – a Country and Western star whose black humour and twisted country songs have entertained audiences at the 1995 Vitalstatistix Cabaret Season in Adelaide, the 1996 Melbourne Fringe Festival, the 1997 Melbourne Comedy Festival, the 1999 Bakehouse Cabaret Season in Adelaide and Sunday Salon at the Adelaide Festival Centre in 1999.

Her cabaret career extends back to the mid 1980s when she was a member of the comedy duo “Dino Valentino and Sandra Lee in Club Italiano” with stand-up comic Bruno Lucia performing in both Adelaide and Melbourne and of female trio “The Freud Sisters” in a successful season of “Animals, Angels and Regular Guys” at the 1988 Adelaide Fringe Festival.

She is currently performing as “Miss Kitty” in 6 piece Gypsy Jazz outfit “Miss Kitty’s Karavan” which debuted at the 2012 Adelaide Fringe in “The Wrong Place at the Right Time”.

Patsy DeCline’ has appeared at the 2000 Adelaide Fringe Festival, the 2000 Sydney Cabaret Convention, the 2002 Adelaide Cabaret Festival with special guest ‘Tony Martini’, the 2003 Gold Coast Arts Festival in “How to Roast A Dead Cowboy”, the 2004 Adelaide Cabaret Festival with her ‘Toe Tappin’ Trio’ in “Hobo’s, Cowpokes and Goddamn Horses”, in a 2004 tour of “How To Roast a Dead Cowboy” for Country Arts to regional South Australia, at the 2005 Whittlesea Country Music Festival, the 2005 “Out Of The Square” Adelaide concert series with her ‘Happy Hoedowners’, the Vitalstatistix Cabaret “Love and Sedition” in 2006, the Adelaide West End Music Festival in 2007, with “Six Quick Chicks” in the 2008 Adelaide Fringe at The Garden Of Unearthly Delights, with ‘Titters’ a Showcase of Funny Women at the 2010 Adelaide Festival Fringe and most recently in her solo show “Miss Patsy DeCline in The Cowgirl’s Revenge” at the 2012 Adelaide Fringe as well as in the “Titters” showcase.

For more information or, to book Patsy DeCline – The Queen Of Country Corn phone Kerry Reid on 0410 437 059 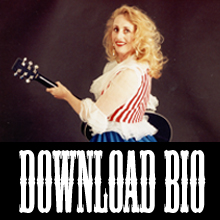 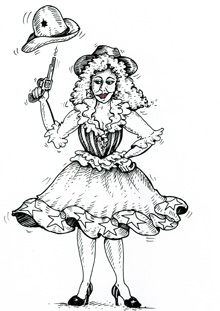